The Libra Constellation: the balance of justice - WeMystic

The Libra Constellation: the balance of justice

This concept of justice and balance already existed from the time of the Babylonians who started to notice that whenever the Libra constellation appeared in their skies, then the days and nights began to have similar duration.

Also, the world and the seasons of the year began to be more balanced in these times, in an astronomical phenomenon that occurs close to the equinoxes. 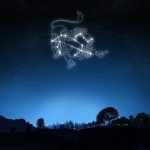 See also
The Leo Constellation: a symbol of force

What about the stars in the Libra constellation?

The Libra constellation is the only constellation of the celestial vault with the name of an inanimate object. It is a very little luminous constellation, being sometimes very difficult to distinguish it in the night sky.

In the same way, both the Moon and the visible planets of the solar system travel trajectories in the sky. These trajectories are in an area called the zodiac belt that covers a width that measures 8 to 9 degrees north to south in the ecliptic.

The zodiacal signs normally used in Astrology were created in 134 BC. by Hipparchus who was inspired by a very old system with Babylonian roots. The Babylonians have inherited this system from the Sumerians, who lived in 3000 BC.

In this system, the Zodiac belt was divided into 12 equal parts, each individual region having a constellation or a ruling sign that occupied about 30° in the sky. These constellations have as a common denominator to mark the birthplace of the Sun at each time of the year.

Currently, the signs and their original constellations do not correspond, essentially due to the phenomenon of the precession of the equinoxes, where the axis of the Earth undergoes a gradual change of its orientation in a cycle that lasts approximately 26,000 years to return to its initial point.