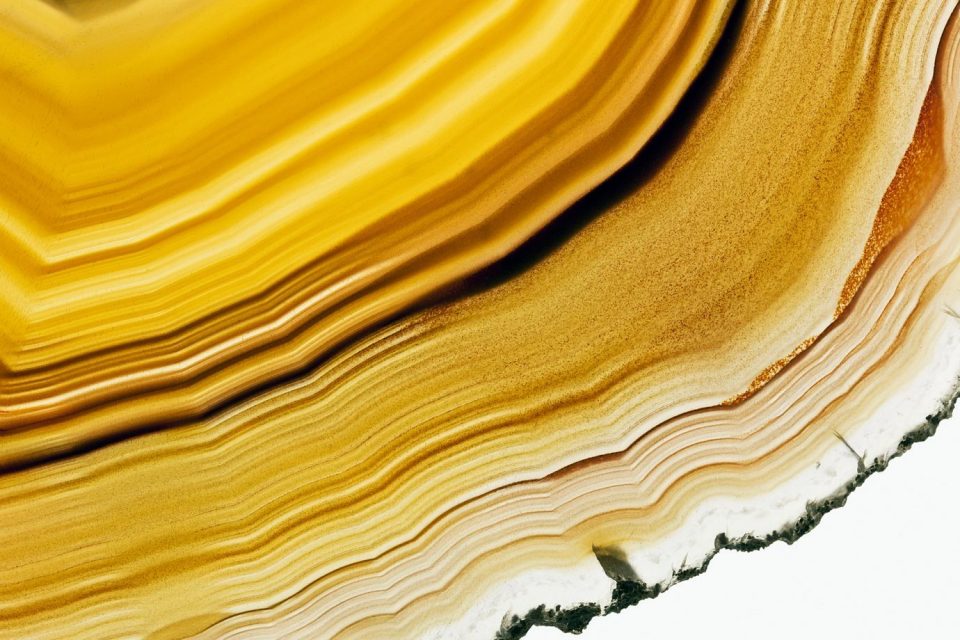 Onyx is a silicon dioxide with the chemical formula SiO2. It is an agate, which is itself a cryptocrystalline variety of quartz, whose bands are circular and concentric. “Onyx” comes from the Greek onux which means “nail”.

The crystalline system of this stone is trigonal. Its hardness is 7 on the Mohs scale and its density is between 2.65 and 2.66. It has a conchoidal break and its luster is glassy. The onyx is often striped black and white, but sometimes only black: in jewelry, it can also be a chalcedony tinted black. In this case, it is opaque while the natural black onyx is translucent.

Characteristics of the onyx

The onyx has a texture in parallel zones, usually black and white (ruby onyx), or brown and white: it is called, in this case, sardoine or sardonix. The strips of onyx are generally circular, and if they are scarcely marked around a dark nucleus, it is said “eyed”. If the bands are polygonal rather than circular, we talk about “fortifications”. Beware, the “onyx marble” and “onyx alabaster” are other stones; they are only called so because of their texture.

As a Saturnian rock, onyx has a bad reputation; in the past it was thought that onyx was the manifestation of a demon trapped inside the stone. This demon came out at night and brought terror and nightmares to everyone in his sphere of influence.

According to Roman mythology, one day Cupid found Venus asleep beside a river and cut her nail clippings with the iron of one of her arrows and flew away. Venus’ nails fell on the sand of India’s shore. Thus, the meaning of the Greek word onux.

The pre-Columbian and Amerindian considered it a sacred stone.

Onyx is one of the finest stones whose properties were the most controversial. Protector in India, it evoked sadness among the Muslim people. Ancient China considered it disturbing, but Buddhists gave it the power to repel evil forces.

Stone of contention in the Middle Ages, it was once again praised in the Renaissance which lent it great powers, including the strengthening of intuitive intelligence and intention, and protection against evil.

For the Indians, it is related to the root chakra, and allows anchoring; it is a stone of purification that allows the initiation to travel in past lives, without fear. It was said that onyx helped parturients in labor, if an onyx stone was placed on their belly. This stone accelerates the healing process and strengthens the pancreas by placing the thin stone on the solar plexus chakra.

With regard to the astrological sign, the semi-precious onyx stone belongs to the signs of Sagittarius, Aquarius and Capricorn.