Numerology of the number seven - WeMystic

Numerology of the number seven 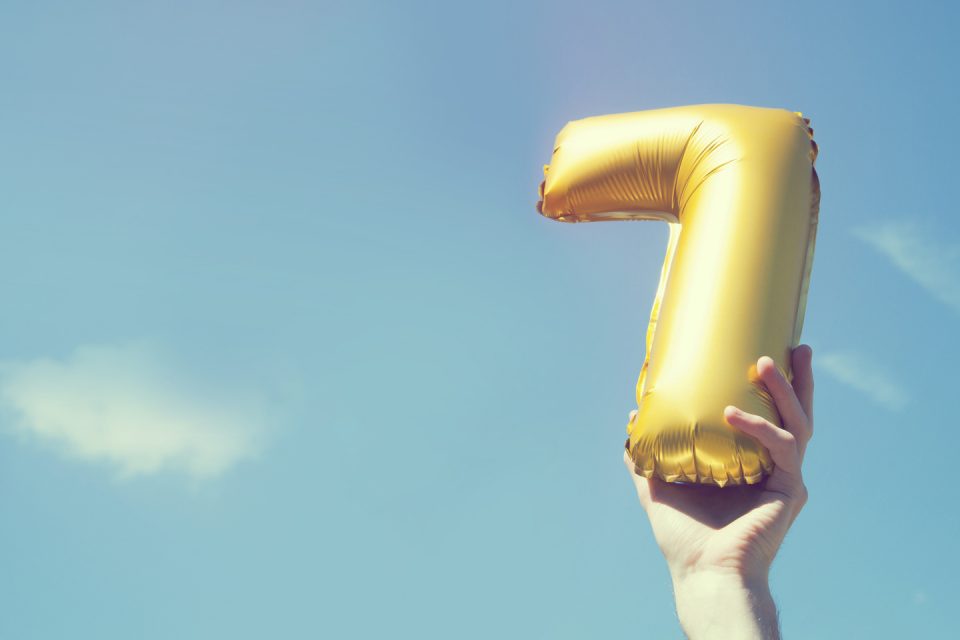 Numerology is the study of numbers, namely the cardinal numbers that compose all other numbers. Though some references cite Numerology as an “occult science,” it is a part of physics, metaphysics, and even astrology. The number seven holds an epic energy, proving this balance of physical and spiritual.

The significance that numbers place in our reality and beyond is existentially amazing. The word “occult” is derived from the Latin word “occultus,” which actually means “hidden or secret,” and therefore when Numerology is referred to as an occult study, this simply means a study for those with “knowledge of the unseen.”

The energetic vibration possessed within numbers may be “hidden” from most, but once you dive into this science, their frequencies become apparent – you can utilize them to understand your past, your predestined journey in this lifetime, and how to better handle future events.

In this article, we will discuss the energy of the number seven; how its shape expresses its meaning, and its relationships across the astrological zodiac and tarot deck.

The Energetic Frequency of the Number Seven

The number seven can be easiest described as the holiest and most magical of the cardinal numbers. The 7 holds an intriguing set of qualities within its energetic weight – it is one of logical analysis and attaining understanding, but also one of spirituality and mysticism.

This analytical energy of number seven is full of vibrations, including: heightened awareness, knowledge, understanding, logic, organization, and judgment.

Secluded introspection and elaborate processes of thought are expressed in the 7 – with an especially strong frequency displaying the ability to contemplate and uncover the truth in any given situation. This can be compared to the obsession one has with completing an extremely large puzzle with many pieces – that is the energy of the Seven.

On the other hand, the 7 also resonates intensely with all that is mystic and esoteric. Some of its qualities include traits like: a thirst for higher wisdom, ritualistic and ancient knowledge, alchemy, connecting with the collective consciousness, extraordinary psychic abilities, searching within/meditation, occult studies, and above all: spirituality and spiritual awakening.

If the number seven was given a goal, it would be to seek and understand as much Universal truth as possible!

Significant examples of the divine powers of the number seven include:

Visual Interpretation of the Number Seven

As we mentioned before, the number seven is closely associated with the analysis and logic of the lower mind. But it also gives off an intense energy of spirituality and mysticism. Put together, the simple shape of the number seven becomes apparent.

The straight lines of the number seven reflect the logical and rational thought process of the Seven. The foundational base is at the top as opposed to the bottom, which represents its contemplative nature and skill of analysis within the mind.

On the flip side of the number seven, the top of the shape also represents its esoteric nature and base of spirituality that holds much wisdom. The 7 remains grounded by staying in its “head,” and the simplicity of the shape expresses how simple life can be if you utilize both logic and spirituality.

Another important point to note about the shape of the number seven is that it also reflects the flow of Kundalini energy through the 7 chakras, which denotes a healthy current of divine energy.

Zodiac Relationships to the Number Seven

The 7th sign of the zodiac is Libra. Libra is a cardinal air sign, represented by the symbol of The Scales. The Scales are symbolic of balance and fair justice. Libra holds fairness and diplomacy at the top of their morals, and also maintain a significant balance between intellect and desires.

As Libras can keep this balance within themselves, they expect the same of others. When involved in anything, they will cease to continue taking part in anything if their physical, spiritual or intellectual needs aren’t met equally.

As an air sign, they are the quadruplicity that is strongest with logic and communication, which aligns with the number seven.

The Chariot is the 7th card of the Major Arcana in the tarot deck. The illustration of this card shows a man inside a chariot that has stars printed on the canopy, reflecting the Universal powers of the cosmos assisting him.

He is also depicted with symbols of alchemy and crescent moons on his clothing, which is extremely telling of his nature. The symbols of alchemy indicate undergoing a spiritual transformation, while the moons facing opposite of each other represent the physical reality here on Earth.

The shape of the Chariot is a square which, as we learned with the number four article, represents a strong foundation of stability. His crown is an obvious indicator of evolving spiritually, which he has attained by keeping a strong sense of balance – logically in the physical, alongside spiritual devotion on the higher soul planes of existence.

This sense of balance is further displayed in the black and white sphinxes at his feet, and in the Hindu symbol on the Chariot which represents positive versus negative.

The person manning the Chariot is holding the wand that The Magician (card 1 of the Tarot) holds. This indicates that he does not need to worry about where he is being steered, because he controls his destiny the same way that The Magician does.

As you see castles in a city far behind him, understand this is a metaphor to symbolize he has given up on the material world in order to seek spiritual growth.

When this card appears, you can be certain that whatever your goals are, you’re correct in assuming the outcome and have a clear understanding of what is needed to accomplish them.

Balance is key, though, and you must be willing to utilize both your logic and heartfelt intuition to be successful (just as with the Number Seven energy!).

The Number Seven represents high balance of the physical and spiritual

The expression of the number seven reminds us that we are all able to attain complete harmonious balance on Earth, but we need to be willing to combine strength of will within both our lower mind (logic and analysis) and our higher mind (spirituality and mystical beliefs).

Also, the Seven energy tells us to stay humble, as keeping grounded with only our mind is beneficial to psychic powers, but can lead to reclusion or arrogance.