The Moon, the arcane of Tarot for June 2020, symbolically designates the fundamental principle of feminine energy. The moon planet is a kind of extension of the earth, of which it is dependent. The symbolism of the moon is therefore close to that of the earth which is, symbolically, our foster mother. We would say that the earth represents the benevolent aspect of the mother, while the moon represents the shadow aspect of the mother.

Both represent instinct and are being fed by the imagination, represented by the moon, recalling the dangers that are associated with spirit and intellect when subjected to the domain of passion and fantasies.

Some of the possible interpretations of The Moon card: you can take a cruise. Changes and disappointments are on their way, as are many uncertainties. The birth of a boy will be near. You need to know yourself and resort to therapies. Constant activities. Triumph of obstacles and challenges. Changes, enemies and disappointments, disturbances of life. The relationship with mother and motherhood can be transcendent. Abandoning childishness to combat disappointment and have a harmonious family life.

Illusion, fantasies, mysteries and hidden secrets. This card of Tarot for June 2020 suggests to be very careful about things hidden within the relationship. The frank conversation between the couple will be the best way out of the doubts and both can feel each other’s energy.

At this moment the Arcane asks you to be careful not to make any hasty decisions but at the same time reveals that you should keep your eyes wide open. It also indicates the possibility of a pregnancy.

If you’re single, be wary of false love delusions , don’t get lost in your path.

If you are from any area that involves creativity, be aware that your instinct will now be brought out by the energy of the moon, thus allowing several doors to open in your path.

But in general, the Moon indicates gossip in the workplace to hurt you, so be very careful about the people you relate to; let your life be a mystery to those who aren’t close friends.

If you are unemployed, be careful not to feed fantasies with dreamy proposals; always be suspicious of such kindness and perfection in proposals.

The Moon is a card that indicates a lot of mystery, secrets, and delusions in our lives, so make decisions with caution and patience; be aware of the people with whom you live.

Generaly, the Moon card advises you to trust your intuitions and let your creativity develop. Stay alert to the signs of your future, always taking the distance you need to keep judgment and analysis right and complete.

Interpretation of The Moon card 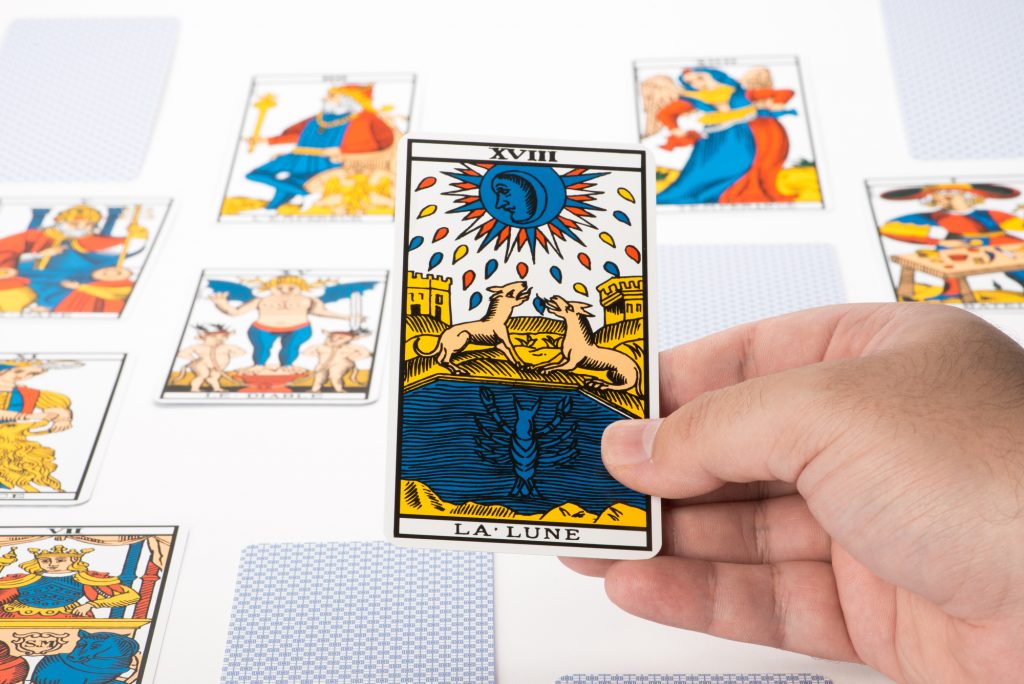 In the card, the Moon appears suspended in the middle of the night, with its rays shining, illuminating the darkness. There are two dogs underneath her barking up at her, they do not want to lose their territory, since the Moon can throw them out, although they are not able to face her either. There are also interpretations that say that there are wolves that howl under the mythical body.

Behind them there are two towers, one on each side, which guide us to the unconscious world, to the depths of our soul. In front of the dogs there is a lake which symbolizes mystery. There is a crab inside of it. It wants to show us the duality of courage and fear. Courage to face a problem but later fear to continue, that is why it is moving backwards.

The message of the Moon card

This card tells us that we are going through a period of confusion that we want to leave but that we are afraid to do so. Fear trumps courage. That is why we must move beyond the past in order to face the future. Problems can only be solved by facing them. And the only way to overcome fear is by cultivating courage. We must analyze reality in the most objective way possible, although we can also rely on our intuition, without necessarily creating a contradiction.

Regarding work, the opportunities that will arise will be related to jobs where you work at night (late night shifts such as nurses, doctors, factory workers, night clubs) or jobs related to the world of children (nurses, midwives, nannies).

Regarding the sentimental world, relationships may come up that have to be kept secret. This will provoke excitement but also a tension for being discovered.

The money generated in the night world will come and go constantly, while, with respect to health, there may be pregnancies, uterus and ovary problems or even depression.