The Death: discover the meaning of this Tarot card - WeMystic

The Death: discover the meaning of this Tarot card 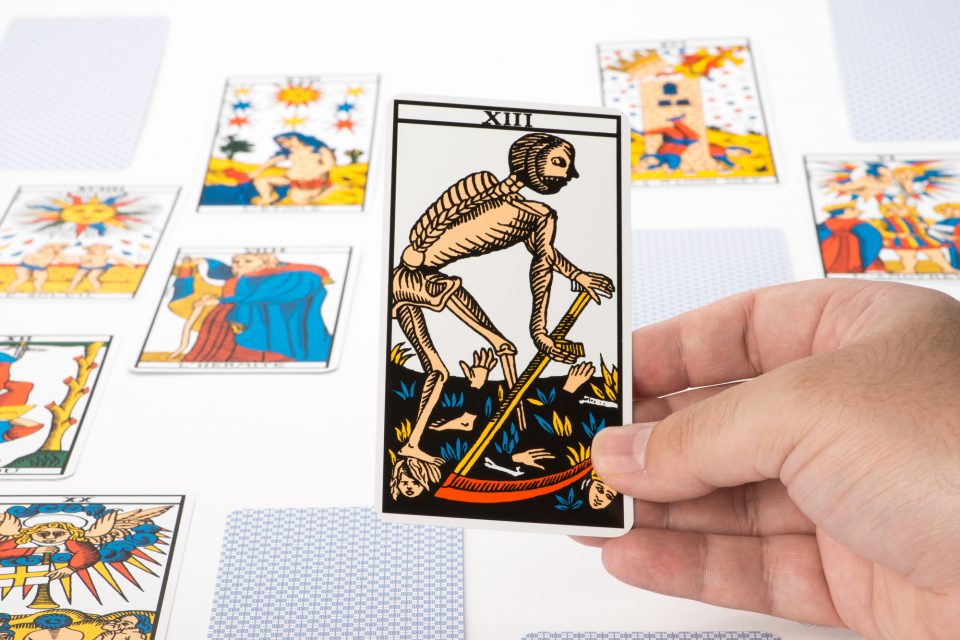 The 78 cards of the tarot deck are a strong tool of divinity we use to better foresee outcomes, unveil insight, and understand the outside influences in this lifetime. The tarot allows us to reconnect with Source and utilize intuition, to live the best version of our physical life here on Earth. The Death Card is labeled card “13” in the tarot deck, and therefore holds an extremely significant meaning when it appears during a tarot reading.

The Death Card ​is the Number “13” card of the Major Arcana in the tarot deck. The Major Arcana is made up of the first 22 cards of the deck, (also known as the “trump cards”), numbered from 0 to 21.

The Death Card is labeled number “13,” so it possesses the vibrational energy and characteristics of the Number Thirteen, as well.

Some of the associations we will analyze to interpret the meaning of the Death Card include its illustration, the Numerology of the Number Thirteen, and the relationship it has with the zodiac sign Scorpio.

Visual Interpretation of The Death Card

The illustration of the Death Card displays what seems to be a skeleton riding a white horse, walking over a dead man on the ground (whose crown has fallen off of his head). He wears a suit of armor, and carries a flag displaying a white rose on a black background.

There is a bishop that seems to be pleading to him, a woman in the corner who is turning away from the scene, and a child on the ground peering intently at the horse.

The skeleton on the horse and the dead man on the ground are symbolic of release, transformation, and rebirth. It reminds us that we have to be willing to “let go” of the past and certain circumstances and habits in order to ride forward toward new opportunities.

As a skeleton is the only thing that remains after death, it is intensely reflective of that which cannot be destroyed – that which will always reside after transformation.

Metaphorically, this represents your spirit and your soul. His armor reminds us of this Universal truth, and proves that he contains an energy that is undefeatable.

The flag the skeleton carries represents the two contradictory sides of duality: the white reflecting purity and rebirth (just like his horse), while the black behind it is a representation of the “absence” of such things – the absence of “light.”

The bishop, who is seemingly praying to the figure, reflects of the idea that those of religious faith do not hold any weight to this transformed and invincible entity of spirit.

The woman in the corner is showing her avoidance to the fact that the physical human world involves “death,” so she refuses to accept this fact by not allowing herself to view the truth. The child expresses innocence and lack of fear, accepting with childlike naivety that this is simply how the world works.

Numerology Association of The Death Card

The Number One​ possesses an energy of ​pioneering, independence, masculinity, confidence, new beginnings, initiation, and individuality.

The Number Four​ possesses a strong masculine energy of foundation, stability, security, practicality, order, diligence, control, and the creation of things that will last.

The Number Thirteen has always been an extremely sacred number throughout history.​ It holds a strong feminine vibration of new beginnings (1), creation (3), and foundation building (4). This is proven in the 13 moons of the year, which also govern and align to the epitome and ultimate symbol of creation within physical humanity: women’s menstrual cycles.

Zodiac Association of The Death Card

The astrological zodiac sign of Scorpio is ruled by the Death Card​. Scorpio is an emotionally intense, intuitive, and passionate water sign that is related to transformation, rebirth and shadow work. Just as their glyph, The Scorpion, they dig deep to reveal all that is lying under the surface – of both a situation or of a person/energy.

The Scorpion has a poisonous stinger, so always think twice about double-crossing this energy because you will be wounded in the process. They can also break off their tail in order to escape a situation, sacrificing themselves to avoid vulnerability. This then includes an incredible inborn ability to regenerate their tail (if they are still young and have molting capabilities).

If they are not young enough to grow a new tail, it is apparent that the Scorpio is open to killing itself, rather than be killed by another.

Scorpios are also obsessively interested in the dark sides of existence and are very psychic. They are patient and utilize their intuition by devising a slow, but steady, strategy.

Scorpio is ruled by Pluto, which is the planet of transformation and the Underworld. Scorpio is also ruled by Mars, the planet of war, aggression and action. Therefore, it is obvious to see why Scorpio is related to the Death Card. This proves Scorpio and the Death Card do not represent “death” as we see it in this physical realm; rather, they represent the “death” of anything that encourages regeneration and positive transformation.

What The Death Card Means In a Reading

When the Death Card shows itself in a tarot reading, it brings along the message that we always have the ability to transform our reality – regardless of the challenges we “perceive” are in the way. We must always remember that pain is temporary, and we all have the innate capacity to rise above adversity and create a new way of thinking.

We can achieve increased self-awareness in situations that involve the “death” of something; this could be the an end to a relationship, interest, hobby, addiction, or any other aspect of life that no longer serves us. And, endings will always bring inevitable change, transitions, transformation, and new beginnings.

If this card appears reversed in a reading, the message one of forcing you to become aware of an inability to “let go” or move forward from a situation. Be aware that you cannot be resistant to change, but should possess a mentality of acceptance and adaptability instead.

Be ready to encounter change that will take your life in a new direction, and/or make you a different person. Even though change can be uncomfortable, there always comes along with it a promise of new experiences and positive reinvention.