Numerology of the number three - WeMystic

Numerology of the number three 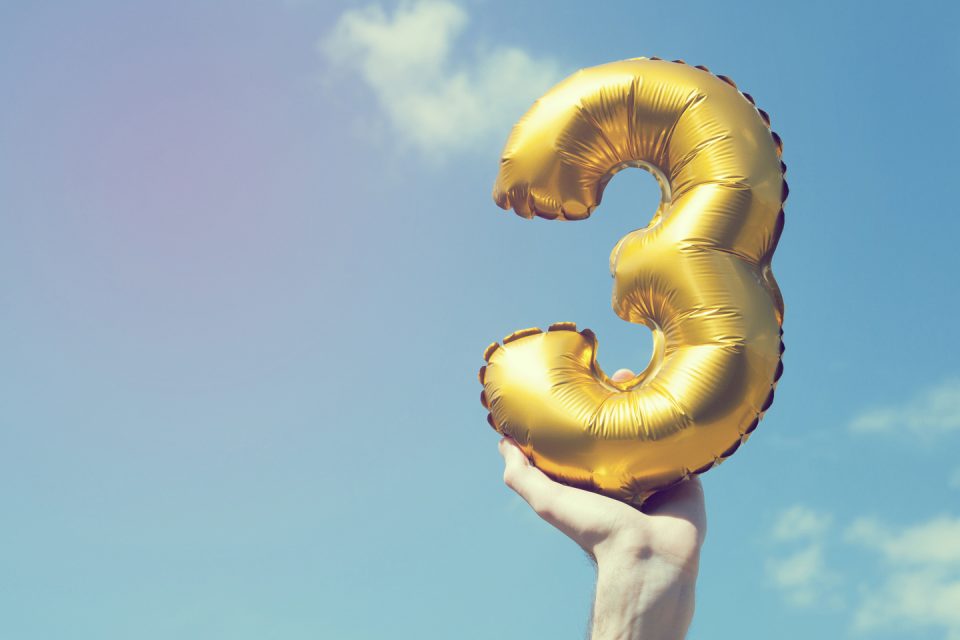 Numerology is the study of numbers in the Universe; a phenomenal science that analyzes and predicts the inevitable effects they have on our lives. Numbers and math have existed longer than the alphabet and are one of the very few unchangeable truths that shape our reality. Number three is no exception.

Numerology is an essential and effective method to understand the messages from our Higher Self and the Universe in this dimension. Once you have developed an awareness to its significance, you will never look at numbers the same.

The number three has been a sacred number since the dawn of time, and here we will dive into the reasons it possesses such a unique and spiritual energy.

The Energetic Frequency of the Number Three

Number three, in the science of numerology, represents an energy reflective of the utmost in artistry and creativity. Imagination and self expression are emitted in the number three, which lends a hand to the vibrational properties of spontaneity, enthusiasm, and optimism.

It is the number of the performer, who consistently emanates extroverted energy of extravagance and indulgence.

The 3 also represents the energy of what is known as “the universal trinity,” or the “holy trinity,” which holds significant symbolism within many areas and cultures of spirituality.

This can be exemplified in many different concepts, such as:

We have mentioned the Universal Laws before, which are the unchangeable laws that govern the Universe. In the Law of Three, it is explained that the number three is a law of balance and completion.

3 creates a unit, as neither of the original two are more or less significant than the other. Each of the 3 portions of the whole now acts not only for itself, but now for the ultimate benefit of the group.

The number three also reflects the vibrational frequency of the Ascended Masters in the spirit realm. These beings were and are the miraculous prophets, teachers, and healers who once resided in human form.

However, they became enlightened, transcending beyond physical human limitations. They’re an inspiration to the seekers of spiritual growth and higher consciousness, offering guidance as they are needed.

Visual Interpretation of the Number Three

The number three has a shape that contains many visual clues as to the vibrational energy it possesses. As reflected in the Universal Law of Three

we just spoke about, it is balanced on all angles, with no part of it being more significant than the other. Additionally, the prestigious Pythagoreans held a belief that number three is actually the first “real” number, as it is also the first single digit number to represent a geometrical figure: the triangle.

The triangle has very strong meaning in ancient symbolism, one of which
holds that a triangle represents a set of divine spiritual energy, action and service to others. A downward facing or upside-down triangle, on the other hand, represented a grounded and down-to-Earth connection in this physical realm of existence.

Zodiac Relationships to the Number Three

The third sign of the zodiac is Gemini , the Twins. Gemini is a perfect representation of “two sides to every story;” because it is all about balance and duality.

Ruled by Mercury, Gemini reflects a love of exchange and highly enjoy expression of logical thought – as Mercury is the planet of communication. This astrological sign of equilibrium is composed of interaction, ideas and the lower mind here on Earth.

The Twins are the reflection of being a flexible, while also giving off an energy of having split personalities that can adapt to any situation at hand.

The Empress is the third card in the Major Arcana of the Tarot deck. She is ruled by Venus, the planet of love, beauty, fertility, abundance, and anything of passion.

When this card appears, it relays a reminder that we need to get in touch with our physical senses and appreciate this life by recognizing the breathtaking beauty of nature that is the Earth.

At the same time, we need to stay creative because it is pertinent to our spirit’s happiness to be able to express our truth, without feeling a need to hold back. Finding new ways to convey who we are also assists humanity, bringing new ideas into the world that may undoubtedly be valuable to many.

And in the spiritual, it is about expressing your true colors of truth, in order to assist humanity in all ways possible. The ultimate vibration of perfect balance.